Excited for our second honeymoon.

This is really just about our flight and arrival in Paris. Our trip took about 14 hours altogether. We had a quick flight to Seattle, then a layover for somewhere around four hours. The flight from Seattle to Paris was about 9.5 hours.

When we arrived in Seattle, we were just too exhausted to do much more than just sit and eat a small breakfast. Then we sat some more. An exciting beginning, I know.

Our flight was finally ready for boarding, so I put on my awesome face mask. My white blood cells had been so low the week before this trip, that my oncologist had me get two shots of Neulasta to get my WBC up to a more normal range. Or at least out of the very dangerous range I was in. My count went down due to a new treatment I had started. I will probably write about that in another post.

Anyway, my new mask is quite pretty. It does get warm, but it does not fog up my glasses like the paper ones do. It has an N99 rating, which means it should keep out 99% of contaminants. For those who are curious, it is a Cambridge Mask Company in the Austen style.

The Austen by Cambridge Masks

Side note: medical masks make people nervous on airplanes. Or at least a lot of people give you strange looks. Whatever. I am not getting your dirty germs today, bitches!

Our flight was 9 1/2 hours of sleeplessness. We did try to sleep, but the sick baby two rows behind and to the side of us was super miserable and let everyone know it. The poor guy had a terrible cough (I was super thankful for my mask) and he just cried for the entire flight. Which also caused all of babies in our area to wail for the entire flight. So no sleeping.

We were not near a window seat, but I did get a few outside pictures of Mount Rainier.

Otherwise, I had a selection of shows and movies to view. Which I didn’t. I spent my time playing silly games and reading The Magicians. I got up a few times to walk around. I watched our trip as we advanced over Canada, then Greenland, skimming past Iceland, going over Scotland and England, to finally arrive in Paris. 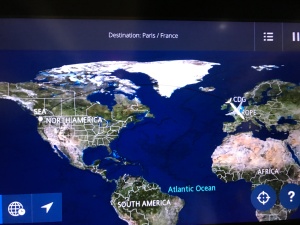 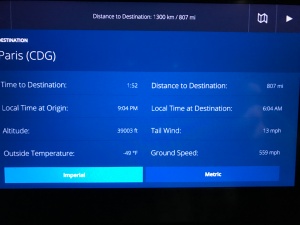 It was a relief to get off of the plane. However, our journey was not done yet. We took the train to a Metro station, the Metro to a stop near our hotel, then we walked with our suitcases to Hotel ATN. We got turned around while trying to find the correct Metro. We looked like obvious tourists, but a young man took pity on us and helped us find the one that would take us where we needed to go.

We were greeted at the hotel by cute statues and a really nice woman. The nice woman told us we could not check in yet. It was about 11 am and we needed to wait until at least 2 pm.

So, we wandered around and had lunch. We still aren’t sure what Gabriel had. It was mislabeled as Quiche. It was some sort of ham and grilled cheese sandwich with more cheese fried on the outside. I was still having a few issues with nausea, so I just had strawberries. While we were wandering around, I admired the buildings. Even the fast food places are fancy. 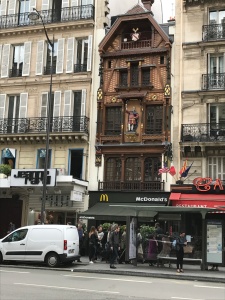 I had my first taste of all the random Paris art that can be found everywhere. The artwork became one of my favorite things about walking around Paris while we were there.

After a few hours, we went back to our hotel and checked in. The rooms are very chic and adorable. Our window looked down into a small square. I had images of women who might have washed and dried their laundry in this square with children running and playing around them. Everything is so old that this could be a possibility of the area’s past. 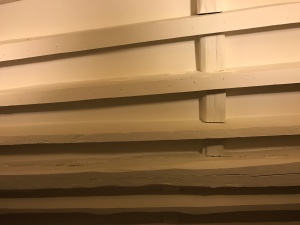 We pretty much crashed after getting our luggage into the room. We did wake up a few hours later to eat dinner at the little bistro at the end of our block, Le Comptoire de l’Europe. It became our favorite place to eat. I always ate almost everything that was served to me. It was one of the first places that had me actually enjoying food again.

We went back to sleep after dinner. We had some big adventures planned for the morning.

3 thoughts on “Paris Part I”